Digital pavilion at The Wrong Biennale

Matsumoto’s artwork reflects the morphological transformations of our ever-evolving urban and ecological milieus, which could be attributed to a multitude of spatio-temporal phenomena influenced by socio-cultural constructs.
They are created as visual commentaries on speculative changes of ecosystems in the transient nature of constantly shifting topography and geology.
The artworks explore the hybrid technique, combining both traditional (ink, acrylic, and graphite) and digital media (cluster-oriented genetic algorithm, 3D scanning and data transcoding).
The adaptive multi-agent approach allows the work to transcend the boundaries between analog and digital media as well as between two- and multi-dimensional domains.

The varying scale, juxtaposition of biomorphic forms, interlaced textures, oblique projections, and visual metamorphoses are employed as the interwoven meshwork of movement to investigate the ubiquitous nature of urban meta-morphology, the inevitable corollary of techno-economic disruption, and their visual representation in the context of non-Euclidean configuration. These multimodal narratives embrace and document the urban metamorphosis of socio-cultural abstractions to maximum effect in a syntactic context.
Matsumoto’s process-oriented compositional techniques imbue the work with what we see as the very essence of our socio-cultural environments, beyond the conventional protocols of architectural and artistic formalities; they conjure up the synthetic possibilities within which the spatial and temporal variations of existing spatial semiotics emerge as the potential products of alchemical procedures. 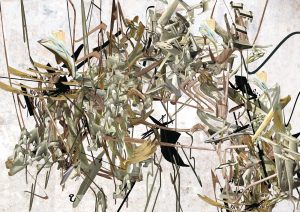 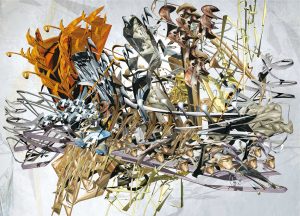 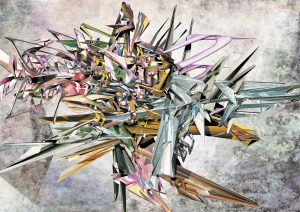 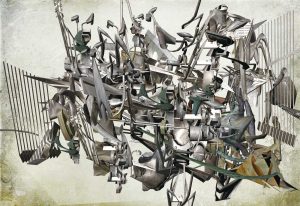 Ryota Matsumoto is a co-director of an award-winning interdisciplinary design office, Ryota Matsumoto Studio. He is an artist, designer and urban planner. Born in Tokyo, he was raised in Hong Kong and Japan. He received a Master of Architecture degree from University of Pennsylvania in 2007 after his studies at Architectural Association in London and Mackintosh School of Architecture, Glasgow School of Art in early 90’s. Matsumoto has previously collaborated with a cofounder of the Metabolist Movement, Kisho Kurokawa, and with Arata Isozaki, Cesar Pelli, Peter Christopherson, MIT Media Lab and Nihon Sekkei Inc. He has taught architecture and interdisciplinary design strategy as a lecturer and visiting critic in the United States, Europe and Japan. His current interest gravitates around the embodiment of cultural possibilities in art, ecology, and urban topography.