Interactive soundscape within a phenomenal artwork, experienced with your eyes closed wearing headphones in a dentist chair. You are in an experiential feedback loop originally between a classic ‘Dreamachine’ (designed by artist Brion Gysin in the 1960s) spinning on a record player, and your brainwaves, as they are monitored and implemented to engage as realtime modulators of sonic samples and volumes. Since 2016 this has been updated with a ‘PandoraStar’ programmable stroboscopic lamp running a ‘Theta’ brainwave entrainment programme, the Phrontesterion transports you into a meditative state. An adapted word from the Greek ‘phrontisteries’ that encourage creativity and innovation, its a experience in letting go and receiving insight and more flow.

During the expansive installation artist Luciana monitors the impact on each visitor’s brainwaves (the EEG signal that communicates to MIDI and audio unit plugins, altering the multilayered soundscape containing 2 tracks of a voice repeating Gysin’s mantra “I AM THAT I AM”). This was played to guests via headphones and to the queue who hear dynamic remixes in the room of previous participants’s whispered ‘ASMR’ visions, feedback stories, thunder, field recordings from around Wells cathedral, suggestions for the sleeping soul and depending on their response.. quotes from The Jung’s Red book..

The experience occurs in a dentist chair, with closed eyes to allow the ‘Entoptic’ patterns & phosphenes stimulated from the white flashing lights to entertain and transport – their effects maybe hallucinations, shadow patterns  and many ‘non-linear narratives’.  Theta waves (4-8 Hz)  are meditative and attention is tuned inwards when entrained by a protocol flickering lights (PandoraStar & Dreamachine). Participants receive access to subconscious idling, reveries and tranquility. Interviews are conducted afterwards to received subjective feedback by the artist and her assistant, most massively underestimated their time spent within the experience, a trance like side effect. 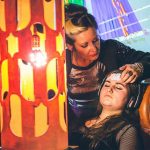 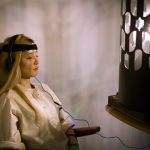 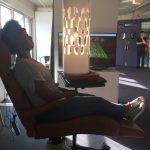 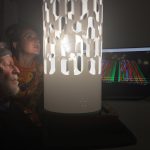 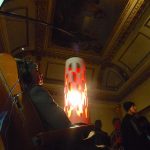 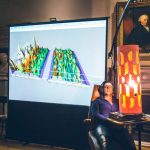 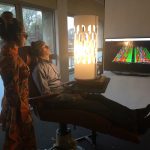 Luciana Haill creates artworks that explore altered states of consciousness, and focus on sleep, lucid dreaming, memory and nostalgia. Having completed the first ever degree in interactive art in the UK, led by Roy Ascott in Newport in 1995, she pioneered the use of brainwave monitoring and creates artworks which combine digital media, augmented reality, performance, drawing and binaural soundscapes.

Inspired by the surrealists and the Beat Generation Haill creates performances where she controls her own brainwave patterns using dreamachines or timed strobe lights in order to trigger dream-like soundscapes and visuals in real-time. Such performances have taken place at venues including Waag Society (Netherlands) and Kibla (Slovenia), FACT (UK) and SPILL Festival (UK). She has also exhibited installations using found objects and digital projections at venues including Phoenix Art Space (UK) and Watermans London (UK).

Most recently she has been working with augmented reality and storytelling to bring lost heritage sites in her home town of Hastings and St Leonards back to life through the creation of 3D models and soundscapes which are triggered by antique postcards. The artworks have led to an interest in the changing face of British seaside towns and the urgent issue of gentrification.